Richer Than God is an authoritative, provocative, investigative account of Manchester City's history, culminating in its transformation as Sheikh Mansour seeks to spend the formerly miserable Manchester club into the European elite. When Conn asked an American working in Abu Dhabi whether its economy had been at all affected by the global recession, he said: 'My friend, we're richer than God'.

It is also a tale of innocence: that of a six-year-old boy transfixed by his sky-blue heroes, coming of age as a writer with the mature understanding that both his club and the game are businesses. Why should modern football continue to claim the unquestioning loyalty of fans, when there is so much in the game to question? 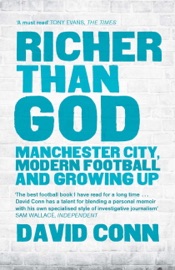