The teachings of these Readings are not sacramental, so far as they go beyond the realm of Morality into those of other domains of Thought and Truth. The Ancient and Accepted Scottish Rite uses the word Dogma in its true sense, of doctrine, or teaching; and is not dogmatic in the odious sense of that term. Everyone is entirely free to reject and dissent from whatsoever herein may seem to him to be untrue or unsound. It is only required of him that he shall weigh what is taught, and give it fair hearing and unprejudiced judgment. Of course, the ancient theosophic and philosophic speculations are not embodied as part of the doctrines of the Rite; but because it is of interest and profit to know what the Ancient Intellect thought upon these subjects, and because nothing so conclusively proves the radical difference between our human and the animal nature, as the capacity of the human mind to entertain such speculations in regard to itself and the Deity. Contents: Apprentice; Fellow-craft; Master; Secret Master; Perfect Master; Intimate Secretary; Provost and Judge; Intendant of the Building; Elu of the Nine; Elu of the Fifteen; Elu of the Twelve; Master Architect; Royal Arch of Solomon; Perfect Elu; Knight of the East; Prince of Jerusalem; Knight of the East and West; Knight Rose Croix; pontiff; Master of the Symbolic Lodge; Noachite or Prussian Knight; Knight of the Royal Axe or Prince of Liabanus; Chief of the Tabernacle; Prince of the Tabernacle; Knight of the Brazen Serpent; Prince of Mercy; Knight Commander of the Temple; Knight of the Sun or Prince Adept; Scottish Knight of St. Andrew; Knight Kadosh; Inspector Inquisitor; Master of the Royal Secret. If you read only one book on Freemasonry, this is it! 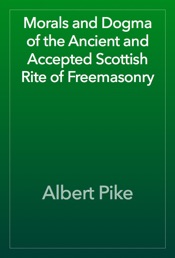