A groundbreaking treatise by one of the great mathematicians of our time, who argues that highly effective thinking can be learned.
What spurs on and inspires a great idea? Can we train ourselves to think in a way that will enable world-changing understandings and insights to emerge?
Richard Hamming said we can, and first inspired a generation of engineers, scientists, and researchers in 1986 with "You and Your Research," an electrifying sermon on why some scientists do great work, why most don't, why he did, and why you should, too. The Art of Doing Science and Engineering is the full expression of what "You and Your Research" outlined. It's a book about thinking; more specifically, a style of thinking by which great ideas are conceived.
The book is filled with stories of great people performing mighty deeds––but they are not meant to simply be admired. Instead, they are to be aspired to, learned from, and surpassed. Hamming consistently returns to Shannon’s information theory, Einstein’s relativity, Grace Hopper’s work on high-level programming, Kaiser’s work on digital fillers, and his own error-correcting codes. He also recounts a number of his spectacular failures as clear examples of what to avoid.
Originally published in 1996 and adapted from a course that Hamming taught at the U.S. Naval Postgraduate School, this edition includes an all-new foreword by designer, engineer, and founder of Dynamicland Bret Victor, and more than 70 redrawn graphs and charts.
The Art of Doing Science and Engineering is a reminder that a childlike capacity for learning and creativity are accessible to everyone. Hamming was as much a teacher as a scientist, and having spent a lifetime forming and confirming a theory of great people, he prepares the next generation for even greater greatness.

"Your last chance to read the words of thinking of one of the major intellects that the USA has produced." ––Eugene N. Miya, NASA researcher
"Hamming is here to tell you about excellence. His lessons unfold through personal stories of discovery and failure--life as an extraordinary scientist. But Hamming demands that you do extraordinary work, too, and for that he offers the best advice I know." ––Andy Matuschak, software engineer, designer, and researcher
"Hamming was always as much a teacher as a scientist, and having spent a lifetime forming and confirming a theory of great people, he felt he could prepare the next generation for even greater greatness. That's the premise and promise of this book." ––Bret Victor, founder of Dynamicland, designer, and engineer 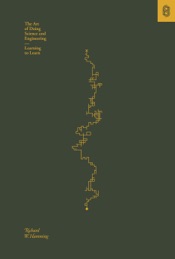