“Reads like a World War II thriller, only better because every word is true.… One of the great untold stories of history. Robert Gandt has brought it vividly, unforgettably to life.” —Steven Pressfield, best-selling author of Gates of Fire

In 1948, when the newly founded nation of Israel came under siege from a coalition of Arab states, a band of volunteer airmen from the United States, Canada, Britain, France, and South Africa arrived to help. They were a small group, fewer than 150. Many were World War II veterans; most of them knowingly violated their nations’ embargoes on the shipment of arms and aircraft to Israel. The airmen risked everything—their careers, citizenship, and lives—to fight for Israel. The saga of the volunteer airmen in Israel’s war of independence stands as one of the most stirring—and little-known—war stories of the past century. 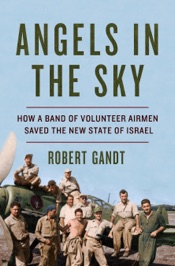